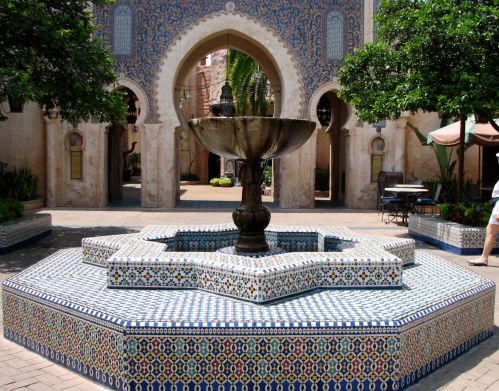 Epcot might be my favorite Disney park. Sure, I love the Magic Kingdom for its nostalgia: nothing makes you feel all warm and fuzzy and filled with child-like wonder than stepping onto Main Street and gazing down at Cinderella’s castle. By comparison, Epcot is a bit more mature and exciting, a merging of my two favorite worlds: nerdy science projects and foods from far-off places.

After you work your way through the science- and technology-based Future World at the front of the park, you reach the World Showcase: an area representing the cultures and cuisines of 11 countries, all positioned along less than one linear mile. And this is why it’s a food enthusiast’s dream come true: it’s like an international smorgasbord. You can start your day with French crepes, then have burritos for lunch, maybe some pot stickers for a snack, fish and chips for dinner, and gelato for dessert. And everything’s merely feet away from each other.

To be honest, I probably find this so amazing because I don’t have such culinary opportunities at home. Both where I grew up and where I live now aren’t exactly hotbeds of interesting ethnic restaurants; in fact, the most adventurous international cuisine would probably be a Chinese restaurant. Granted, the addition of Biba to my town’s main street, as well as a Japanese restaurant that opened slightly before that, elevated my county’s international fare by like 200%, but they’re just two restaurants. And true, I can experience nearly every ethnic food I want in relatively nearby Pittsburgh, but that’s still a 45-minute drive. Did I mention that Epcot’s eateries are only feet away from each other?

But I digress. I have my favorites among the 11 pavilions, the ones I need to hit on every trip if I can fit it in the schedule (French pastries and Italian gelato, anyone?). Until now, Morocco wasn’t on that list; we had only dined in there once, many years ago. But as luck would have it, on this trip we ended up in Morocco on two separate occasions: one planned and one impromptu. And now it might be very near the top of that favorites list.

This was the only table-service restaurant we made a reservation for on our trip, and it ended up being completely unnecessary. It was like we had the entire restaurant to ourselves. Tip: If you find yourself in Epcot without a meal reservation, head here. Moroccan food is still a little exotic by American standards, so families and less adventurous eaters tend to shy away, and you can often walk right up and get a table without much wait.

The entire pavilion is beautiful and exotic, designed collaboratively with the Moroccan government, but Restaurant Marrakesh is especially stunning. Beautifully carved woods, rich tapestries, and intricately tiled walls and ceilings can be seen throughout.

We stopped here for lunch, which offers many of the same items on the dinner menu at much lower prices, many times a difference of about $10 per entree. I’m sure the portion sizes are also slightly smaller, but we didn’t leave feeling hungry at all.

If I had to sum up the crux of Moroccan food, I’d say it’s Mediterranean with Middle Eastern and African influences. You’ll find it has some similarity to Greek food, but it’s the combination of spices and seasonings that make it distinctly Moroccan. Common flavors that lend that African twist include cumin, ginger or cinnamon, paprika, turmeric, coriander, saffron, and judicious use of parsley and mint.

I ordered chicken shish kebabs with dried fruit couscous, along with a Moroccan iced tea. The tea was a combination of green and mint and was not only refreshing on the hot day but also offered a clean counterpart to the richer flavors of the meal. On my two skewers were seasoned chicken breast cubes and an assortment of vegetables—tomatoes, onions, zucchini, and peppers—all laid out on a bed of sauce. The seasoning on the chicken was wonderful, but hard for me to identify. Cumin was there for sure, and if it follows most other Moroccan seasoning rules, likely coriander, perhaps ginger or cinnamon, paprika, maybe some turmeric. It’s difficult for me to pick out the individual flavors, but in combination, it works beautifully.

By comparison, the vegetables and couscous were a little less flavorful, and I found I needed to use more of the sauce after my tastebuds had been wowed by the chicken. On the side was an olive salad; its salty, briny flavor rounded out the meal nicely.

My husband ordered the beef couscous, a slow-roasted beef and vegetable dish served atop the restaurant’s signature couscous (a more savory version than the one on my plate, without the dried fruit). The beef was beyond tender, but I found the flavor a little disappointing: it seemed to be a very good version of basic roast beef, with nothing especially Moroccan about the seasoning.

We found ourselves at Tangierine Café later in our trip by happy circumstance. We are avid planners and usually plot out our dining choices in advance of the trip, even if we don’t need reservations, and we had planned to go to the Rose and Crown Pub for a light dinner one evening. (The Rose and Crown restaurant has two sides: a dining room that offers a full menu, and a pub that has lighter fare.) We had never been to the pub before, and it was smaller than we realized with very few tables. Rather than wait, we decided to walk a few countries over to Morocco’s counter-service restaurant, Tangierine Café.

Like Restaurant Marrakesh, there’s never much of a wait here, and we were able to walk right up to the counter to order. I must still stress: the lack of wait is not because of bad food, just cautious eaters. This was my second time at Tangierine, and it’s quickly becoming one of my favorite counter-service places in all of WDW.

I selected the chicken shawarma platter, my husband, the trio of Mediterranean sliders. All of the dishes include an entrée and a trio of sides, which vary depending on the entrée you select. I’m not sure if substitutions are available because I’ve never asked.

Although shawarma is often served as a sandwich, Tangierine serves its cubed chicken shawarma thighs on a plate, dressed with a garlic yogurt sauce and sliced onions. There’s pita on the side, which you could use if you really want to make it into a sandwich, but I used it instead to scoop up the hummus, one of my sides. The hummus was good, and likely authentic, but Sabra hummus (yup, the one you can buy at the supermarket) has spoiled me for all time, and Tangierine’s version wasn’t quite the same. My other sides were couscous and tabouleh. Tangierine doesn’t cut its tabouleh with any sort of grain as many do, like additional couscous; rather, it’s just parsley, tomatoes, red onion, a light dressing, and garlic—lots of garlic. It’s wonderful, because you get the kick of garlic and onion at the beginning of a bite, but as you chew the parsley, it neutralizes the flavors, so at the end, your mouth feels like you haven’t had garlic at all—it’s like a science project in your mouth.

The Mediterranean sliders platter serves up lamb, chicken, and falafel patties, each tucked into a pita pocket and dressed with garlic yogurt sauce, sliced onions, and lettuce. On the side are hummus (which unfortunately you don’t get a separate pita for), tabouleh, and lentil salad. Oh, I could go on and on about the lentil salad: it’s a perfect balance of starchy lentils and light lemon dressing. According to AllEars.net’s Disney recipe page, it’s just a combination of mayonnaise (!?), lemon juice, salt, and pepper, although additional flavor is also derived from the diced bell peppers and red onions. Whatever it is, it works, and I’m going to definitely start making this at home.

In fact, our Tangierine Café meals were so good, I forgot to take a picture. Thank goodness someone on Flickr Creative Commons also loves the restaurant as much as we do.